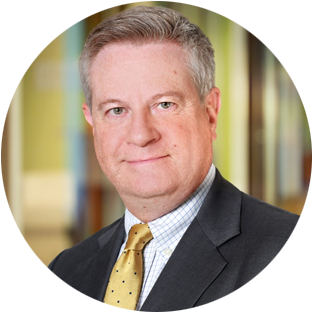 With more than a decade’s experience as a hospital administrator, Rob Fuller brings tremendous insight and knowledge drawn from this hands-on experience and leadership to his healthcare legal practice. Rob utilizes his next-level healthcare management skillset to advise on transactional, operational and regulatory matters in the healthcare industry. His transactional experience includes counseling on mergers, acquisitions, financing, securities, formation, governance, purchase, sale and licensing of businesses. Rob’s securities  practice goes beyond the basics of private placements, early round capital raise for startups, bond issuance, and 3(b) registration compliance, as he has developed various cash flow-based derivatives and other specialty securities designed to meet diversified investor needs. His finance practice is equally sophisticated, with experience in all forms of secured and unsecured financing, including diverse swap instruments hedging interest rates and commodity pricing.

Rob has recently represented a number of clients in the turnaround space who acquire assets or enter into joint venture arrangements with historical operators. As the historical operators seek to monetize underperforming assets, Rob identifies creative structures to limit risk to the new operators of the assets while accessing above-market returns for their investment and expertise. These transactions are heavily dependent on multi-tier risk-on financing vehicles, and a detailed knowledge of the downside protections and bankruptcy law.

One of the greatest challenges for companies in the healthcare industry is the length of time it takes to get a claim paid. For instance, the lags in California’s worker’s compensation program typically run two years or more. Anticipating that the advent of Labor Code 4903.8 would bring factoring to a halt in 2017, Rob designed a lending program with multiple exit strategies which did not rely on accounts receivables as collateral. By creating new cash flow models and the ability to create cash flow rights after accounts had been monetized, Rob’s design ensured that Nelson Hardiman clients were secured in over $100 million in facilities. The same kind of foresight has allowed him to create bond-equivalent securities  for hedge fund investors seeking counter-cyclical healthcare related  investments.

Beyond core healthcare issues, Rob also advises clients on general business matters including antitrust, corporate governance, nonprofit regulation, general commercial and real estate law. In addition, he has an extensive trial and appellate background including criminal defense. Rob is admitted in California and New York, and is a member of the bars of numerous federal district and circuit courts, as well as the United States Supreme  Court.

Dedicated to advancing healthcare management excellence, Rob is a Fellow of the American College of Healthcare Executives, an international professional society of healthcare executives who lead hospitals, healthcare systems, and other healthcare organizations.

Rob was selected to the 2020 Southern California Super Lawyers list for the third consecutive year.

Outside of his stellar healthcare practice, Rob can be found chasing a golf ball during the day and indulging in astrophotography at night as an active member of an astronomy club. Rumors are that he is a closet math geek, and enjoys analyzing data and keeping up with the universe. He also spends his free time off-roading in the desert and raising rescued dogs.

Rob Fuller has over three decades of transactional experience in New York and California handling finance, mergers and acquisitions, antitrust advisory, regulatory and corporate governance matters for healthcare organizations and corporate entities, including:

7 cases in US District Court, made HSR and related filings, handled extensive Second Requests, and CIDs.

Rob has tried over thirty cases, jury and non-jury, and handled over a dozen appellate matters (member of the Bar of the US Supreme Court and most Circuit Courts of Appeal), including:

Rob has handled significant alternate dispute and arbitration proceedings, including:

Rob Fuller interviewed on Bloomberg Law Radio: CDC guidance on masks and what it means for businesses.

Finding a Transverse Path over the PHE

Realistic Planning Timeline for Return to Normality: When will vaccines and drugs get here?

The Best Ideas on the Direction of Healthcare: Where We are Headed Post-PHE

Pandemic or not, justifying mergers based on ‘failing firm’ defense faces hard sell

Reorganization, Restructuring, Distressed Assets, and Bankruptcy in the Wake of COVID-19-Related Business Interruptions

Nelson Hardiman is the Largest Healthcare firm in Los Angeles

3 Takeaways From The $69B CVS-Aetna Deal

Rob Fuller interviewed on Bloomberg Law Radio: CDC guidance on masks and what it means for businesses.

Pandemic or not, justifying mergers based on ‘failing firm’ defense faces hard sell

Nelson Hardiman is the Largest Healthcare firm in Los Angeles

3 Takeaways From The $69B CVS-Aetna Deal

From Obamacare to Trumpcare Feature Article

Does the AHCA take away a veterans tax credit?

Will Aetna, Humana merger go through?

Aetna Humana Merger Will Be a Hard Call for DOJ

DOJ Lawsuit Against Carolinas HealthCare May Impact Contracting in Other Markets

Regulators Tamp Down on Mergers of Hospitals, The New York Times

With Merging of Insurers, Questions for Patients About Costs and Innovation

With Merging of Insurers, Questions for Patients About Costs and Innovation, The New York Times

What You Need to Know From the New PwC, Kaufman M&A Analyses, Business Drive

Realistic Planning Timeline for Return to Normality: When will vaccines and drugs get here?

Reorganization, Restructuring, Distressed Assets, and Bankruptcy in the Wake of COVID-19-Related Business Interruptions

How to handle restructuring or closure of your business in the wake of Covid?

Healthcare Investing in the Trump Era

Opportunities for Investors and Operators

From Obamacare to Trumpcare: Why You Should Care