Addressing Concerns Over The Dramatically Changing Landscape of Healthcare 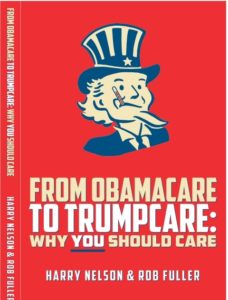 Presidential transitions naturally involve unknowns, but arguably, the passing of the baton from Barack Obama to Donald Trump may stir up a greater degree of uncertainty than usual, especially in the healthcare field.

From Obamacare to Trumpcare…Why You Should Care

Harry Nelson, healthcare attorney and partner at Nelson Hardiman, LLP, has co-authored (along with Nelson Hardiman partner Rob Fuller) a book that gets to the heart of the questions so many people are asking as they wonder if their health insurance will soon be a thing of the past. From Obamacare to Trumpcare…Why You Should Care not only clarifies the issues surrounding the changing of the guard in Washington when it comes to healthcare, but it also provides answers to some of consumers’ most pressing concerns.

Nelson was recently interviewed on KTVU about the book, as well as his perspective on the dramatically changing landscape of healthcare.

“We’ve seen, over the last seven years through Obamacare, the biggest change in 50 years in U.S. healthcare,” Nelson states, “and depending on what President Trump and the Republican Congress do, we could be seeing another massive, second change in seven years.”

“This will affect everybody.”

Contrary to popular belief, the repeal of the Affordable Care Act (which Nelson explains is in actuality a “defunding of the mechanisms put in place” during the Obama administration) will not only impact those people who currently have insurance under an ACA exchange, but everyone with health coverage, whether through their employers or through an individual or state program.

In terms of the statistics for California residents alone: currently 1.5-2 million people in the state are covered under exchange policies; the number of Medicaid enrollees jumped from around 8 million to over 12 million under the ACA; and 20 million Californians are getting employer-based coverage at the present time. All will be affected by the defunding of the ACA.

Nelson was asked about Trump’s promise to force big pharma to reduce their prices. Nelson pointed out that under the ACA, Medicare is not allowed to negotiate drug prices. Therefore, Congress would need to go along with Trump’s desire to limit drug companies’ profits in order to make that vision a reality. However, fluctuating stock prices likely reflect the uncertainty within the pharmaceutical industry itself.

Covered California: Can state residents continue to count on it?

Nelson calls the concern about the Covered California program disappearing “the million-dollar question.” He says that the recent defunding of Obamacare voted on in the Senate and the House in no way threatens that state program. Rather, what the defunding does is cut off federal monies to Covered California in two years’ time.

But that doesn’t mean the program will sink.

“California is one of several states looking at an unprecedented step of essentially becoming its own health insurance company,” Nelson explains, “and essentially making healthcare a bigger part of the state budget than it already is.”

Is the healthcare prognosis wholly bleak under the new administration?

“It’s not all bad news,” Nelson adds. He notes that the ACA was intended to increase affordability of healthcare and expand access to healthcare. He says it definitely achieved the latter, particularly through expanded access to Medicaid. However, he observes that Obamacare “did not solve affordability.”

Nelson believes that consumers might reap some benefits from proposed changes when it comes to bottom-line healthcare pricing, namely “market-driven pressure, reducing insurance to more of a catastrophic thing, and getting people to pay out of pocket.”

MORE ABOUT THE BOOK: From Obamacare to Trumpcare…Why You Should Care